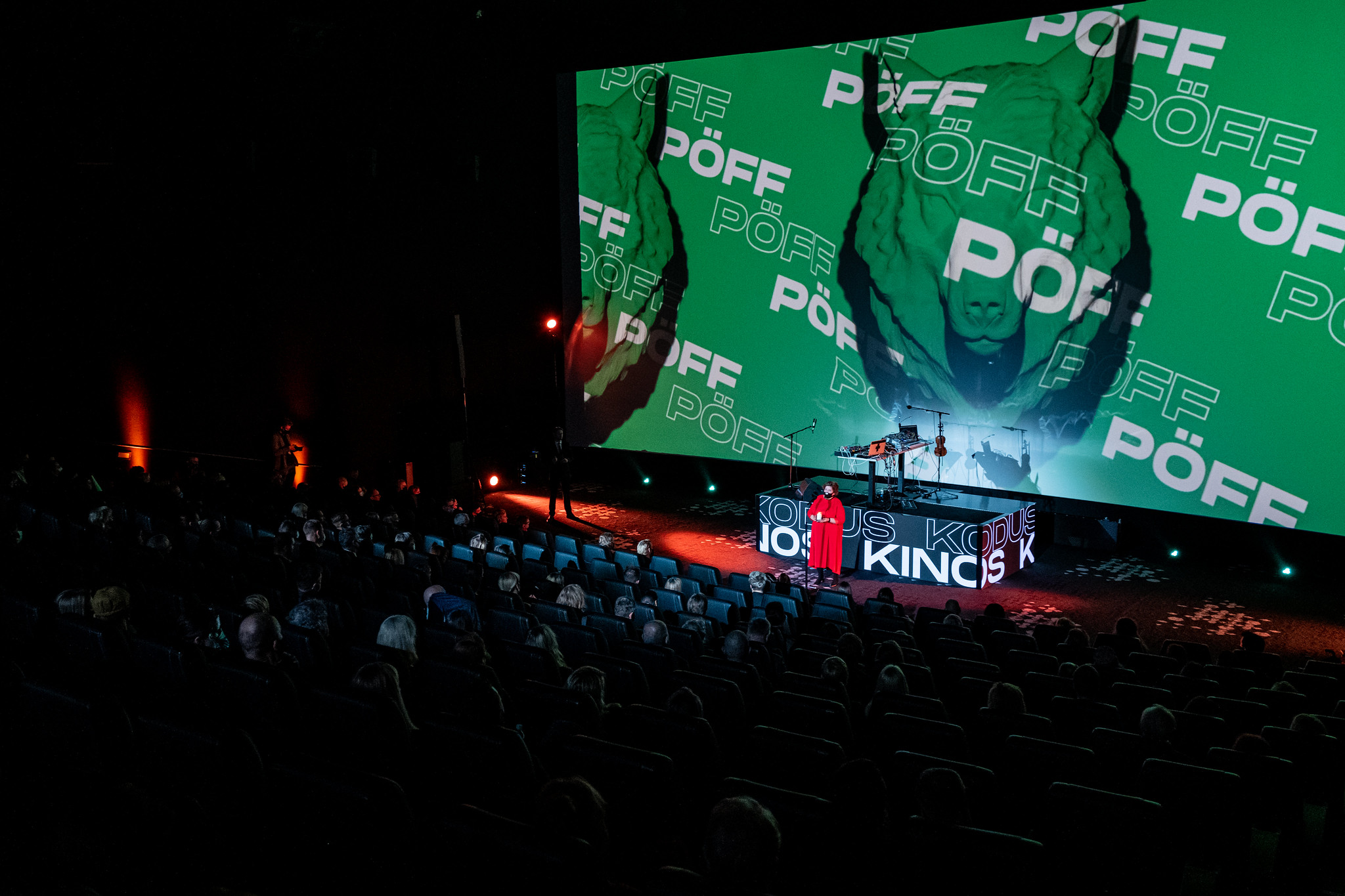 When the 17-day-long festival rollercoaster reached its destination at the end of November, it was clear that it had been a ride to remember!

The fact that the Tallinn Black Nights Film Festival (aka PÖFF) succeeded in holding a hybrid film festival with international guests amidst a pandemic, keeping everyone safe and building up a new online environment with an even smaller budget than usual, felt like a miracle itself.

“Even if the physical, collective experience in cinema halls and screening rooms remains the main aspiration of Black Nights Film Festival in the future, it was clear from very early on for the team that this would not be the reality in 2020,” said festival director Tiina Lokk on the decision to organise the festival in a hybrid format. This essentially meant organising two events, as there were over 600 screenings in cinemas all over Estonia (Tallinn, Tartu, Kohtla-Järve, Narva and Jõhvi), while a new online environment was developed in cooperation with Shift72 and Elisa. This also meant translating the physical festival experience to online: meeting the filmmakers and festival team members via video interviews, talking to all the filmmakers via video chat (service by Vialog), introducing most of the film screenings, both in cinemas and online, with an introductory Q&A with filmmakers before films.

Having seen steady growth in international guest attendance and audiences over the last years (80 000 attendances in 2018, 90 000 attendances in 2019), Black Nights had the difficult task of fulfilling the expectations of various groups: the industry, the audience, and the press. In the context of many A-class film festivals cancelling their editions throughout 2020 or not holding any competition programmes, it was a challenge to deliver a high-quality programme, present new talent, draw international attention to competitions, bring filmmakers to Tallinn during a pandemic and enable an exchange between the audiences and filmmakers. Surprisingly enough, the festival had a record number of world (38) and international (32) premieres in its various sections, also a very successful German focus through all sub festivals and Industry@Tallinn & Baltic Event.

Due to film rights, geoblocking, screening period (2-5 days per film) and audience limitations per screening had to be applied to the films screened to regular audiences in Estonia, while most of the films in the four competition programmes were available to professionals and press all over the world. The 290 online screenings for professionals with global access made 9800 viewings from all of the continents, including Europe, Asia, North and Latin America, Australia and even New Zealand.

The festival was also able to reach new audiences in smaller Estonian cities and rural areas and luckily cinemas were kept open, although with several safety restrictions. This allowed Black Nights to set a new audience record of over 100 000 attendances, combining online and physical screenings, invites, complimentary tickets and industry attendance.

Generating over a hundred reviews in the international press, the programme was received extremely well by critics and the industry with a record number of deals announced already during the festival. Many films from previous year's Competition programmes have entered the award circuit of festivals - nominated and awarded by Goya, BAFTA, German film Awards etc, presented as their Oscar entries and nominated for the EFA award. The festival worked hand in hand with German Film Institute, Rosskino in Russia, I AGICI in Italy and European Film Promotion introducing up and coming young talents from various programmes to the world.
Tiina Lokk summed up the year: “We are so happy having pulled it off, as the second wave of the pandemic hit Estonia the week after our festival took place, closing borders and cinema halls once again. The fact that we were able to maintain the accredited guests' number at 1600 and grow the total attendance to over 102 000, both with the help of going digital, for a country of 1,3 million inhabitants, on a year like this, we feel incredibly thankful that we had the chance to create a true film festival while there were so many of them postponed.“

“What we suffered in the loss of revenue, we made up in terms of global visibility – reaching completely new people by going virtual,” Tiina added. This is highlighted by the fact that the festival’s potential global media audience rose to 9.1 billion, with mentions in over 6500 varied coverage in 71 countries.

While PÖFF was organised as a hybrid event, Industry@Tallinn & Baltic Event decided to bring the whole programme online onto a specially designed platform introducing 62 events altogether, including film and drama series project presentations, panels, workshops, masterclasses and forums. It was a conscious decision, as the team was keen on organising an event that could be inclusive rather than exclusive. A decision that proved to be right as the events attracted over 35 000 virtual attendances, with 900 accreditations – a significant rise from last year. In addition to enlarging the geographical area of the guests, it also gave them the possibility to make business, network and learn while staying safe at home. Featured projects and featured participants had dedicated pages with detailed information and pitch videos. Events, projects and featured professionals are to this day accessible for accredited quests.

While taking up a new challenge, no compromise was made in terms of quality. The statistics can be one indication of this as the projects presented had over 700 meetings with co-producers, sales agents, distributors and festival programmers, resulting in new collaborations to be seen on screen - big or small - in the nearest future. Projects by companies like Unafilm, Zentropa, Filmbyen, Arizona Films, Paradox House or Achtungpanda won’t take long to be completed and presented to the audiences.

This brings us to the next burning topic - COVID or not, the most pressing aspects always remain the project packaging, presentation and distribution to the audiences. Guided through these rocky roads, sessions by pitching mentor Bonnie Williams, packaging and distribution guru Deborah Rowland or sales agent Tine Klint were the most attended and praised among all. European Film Forum Tallinn added insight into the distribution and future of film festivals and markets with Vanja Kaludercic, Ewa Puszczynska, Todd Brown, Ben Johnson among others.

Tackling the drama series production, TV Beats Forum presentations and discussion panels included more than 40 speakers from the US and Europe, among them Filippa Wallestam from Viaplay, Madeline di Nonna from Geena Davis Institute, the creator of Deutschland 83 Jörg Winger, TV4 Media Head of Scripted for Scandinavia and Baltics Piodor Gustafsson. Discussions were held about the production and co-production during the COVID-19 era, gender equality in the drama series production, or how to talk to global streamers. Case studies and 12 newest drama series from the region were presented, giving updates of what’s coming next in 2021.

In 2020, Creative Gate launched a new activity called Black Room which is Industry@Tallinn’s training programme that explores the visual language of cinema and each year focuses on a new skill set within the Art Department. One week of masterclasses and workshops by world-renowned professionals took place online. The program started with 3 outstanding mentors - Jacqueline Abrahams („The Lobster” and „Lady Macbeth”), Maria Djurkovic (The Imitation Game", "Tinker Tailor Soldier Spy" and "Billy Elliot") and Simon Weisse who came to teach straight from the shooting of „Matrix 4” and is the master of miniature models for cinema, which have created the worlds of Wes Anderson’s „Isle of Dogs” and „Grand Budapest Hotel”. Music Meets Film, Creative Gate’s film scoring series, reached a highlight with composer Danny Elfman’s (“Edward Scissorhands”, “The Nightmare Before Christmas”, “Batman”) workshop.

Certainly, the business still greatly relies on personal contacts but judging from the feedback of 2020 Industry guests, the online event was nevertheless a success. The development of the online platform will continue in 2021 making it a unique gateway to the information space of various fields of the film industry and creative industries, combining different databases and creating a new, year-round market environment for films, talents, projects, locations, hotels and more.

So what’s the outcome? One of the most inspiring and reassuring proposals was worded at the end of our week-long sessions: Stay connected and support each other, as we’re in it together!

Eyes on the future

In 2021 Black Nights Film Festival is celebrating an anniversary – the 25th edition! Tiina Lokk gave some foresight to the next developments: “We have several ideas on how to make this year’s event memorable. As we have always emphasized sharing knowledge and nurturing talent, there will be a major new development announced this spring that will mark a giant leap in our film education strands. The newly created online environment will make it possible to soon launch the Black Nights Film Academy for young film professionals from all over the world. Furthermore, to build up online Creative Gate - a year-round film, project and talent market, the entrance to Estonian Film Industry and designed for the Creative and Service Industry professionals who are interested in shooting in Estonia."

In addition to this, 2021 will mark a leap in nurturing its future audience. ”Educating and nurturing a young audience has been one of the main intentions of the festival over the years,” says Mikk Granström, the head of Just Film, the Youth and Children strand of PÖFF. “Starting this year, PÖFF, in cooperation with the Baltic Film and Media School, will launch an online learning platform, where courses, designed by the festival, will be offered to general education schools, meaning all schools will be able to open a film study course as an optional subject,” he added. Just Film has also decided to set up a Scholarship Competition for high school students up to 12th grade, to encourage filmmaking and participate at a major film festival – the films of the scholarship recipients will have the opportunity to be screened at the Just Film Youth and Children Film Festival. They will also be invited to take part in lectures, workshops or other events that are part of the programmes of Black Nights and Industry@Tallinn & Baltic Event.

While looking into the future with optimism, the festival team is also planning to celebrate the anniversary by leaving a trace on the urban fabric of the city of Tallinn. “While moving towards the future, we should not forget our roots,” says Tiina Lokk. “With that in mind, we are planning to do some serious root planting this year!” she added with a mysterious smile.